Coronavirus: Romance scams, the Yahoo boys and my friend Beth

3 min read
You may well think you'd never fall for a romance scam, that they're cheesy, inauthentic and very obviously after your cash. But security experts have warned that there's been an increase in all sorts of online fraud during the coronavirus pandemic.

It happened to my friend Beth.

One day she mentioned that she had met a man online who was in the military. She thought it was a neat coincidence, because my partner is also in the armed forces. But the more she told me, the louder the alarm bells rang.
Despite being deployed on a "top secret mission" in a highly dangerous part of the world, "Alexander" managed to message Beth all the time. He was handsome, charming and affectionate.
When she showed me a photo, my heart sank. Alexander's uniform and rank didn't match the role he said he had or the unit he said he was in. There was no reason for him to be in the place where he claimed to be.
He was almost certainly not the man in the photo.

'He could be anyone, anywhere'

Telling Beth was hard. "It made me shake," she said.
"You start thinking this could be someone that you could have the chance to meet and see if there's any potential to see how it goes... then straight after that is the shock that you've been talking to someone who is not the person he said he was, and who could be anyone, anywhere in the world."
If it hadn't been for the coincidence of our joint military connection, Beth probably wouldn't have mentioned him to me or anyone else - he had already spun a web of secrecy around his job.
In fact, telling someone else is probably your best chance of not getting sucked in.

Alexander contacted Beth on a dating platform, but he very quickly asked her to switch to a messaging app.

Cyber-security expert Prof Alan Woodward says scammers much prefer to operate within a private environment, away from the chance of being seen by others - whether that's a direct messaging platform or a locked social media account.
"Effectively you're giving them a bit of camouflage," he says. "There isn't going to be somebody who can see publicly that the same person who might have been trying to scam them is now trying to scam you."
I noticed myself that, after making my own Instagram account private, I was deluged with follow requests and private messages, all apparently from men, many of them claiming to have military positions.
The military represents "authority, trust, romance" for many people, says New York Times reporter Jack Nicas, who made a documentary about romance scammers and their victims.
"For many, particularly women in middle America, the military guy is the 'ideal man'," he says.

I wondered how the real people in the photos the scammers were using would feel if they knew, and I then got a small taste of it myself when someone set up a fake Instagram account using my pictures, and started messaging people - mainly men I believe - saying it was my "secret" space. 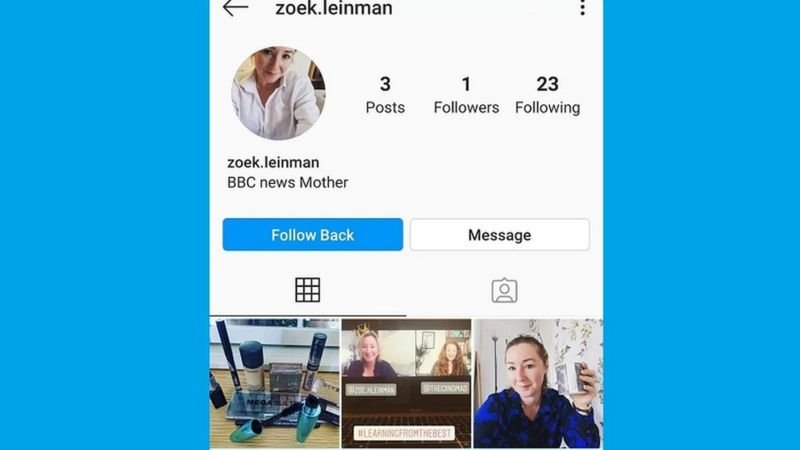 I only found out when people started messaging me to ask what was going on. It was sickening, alarming and infuriating.
I'll probably never know exactly what the "fake me" said and to whom. It was all in the form of private messages from an account bearing my name and my face.
Instagram deleted it when I complained, but declined to tell me whereabouts in the world it had been registered. Perhaps it was even Alexander, finding me via Beth's followers.
The platform said impersonating a person or organisation is against its guidelines, and that such accounts are deleted once it is made aware of them. A quick search reveals that there are plenty out there though.
For scammers it's worth the risk, as the pay-out can be huge.

There are people who work to try to help romance scam victims, and they hear plenty of horror stories.
One is Lisa Forte, from Red Goat Cyber-Security, who was contacted by a British lawyer in her 40s who had given $350,000 to a scammer in South America - which she got by re-mortgaging her house.

Wayne May, who runs the group Scam Survivors, told us of a man in Russia who gave $250,000 to a man he believed he was having a secret relationship with.

And Jack Nicas interviewed Renee Holland from Florida, who transferred her life savings to a man pretending to be in the US military. She was later killed by her husband.

The money, particularly if sent by wire transfer, is generally gone forever.

He interviewed a man called Akinola Bolaji, a 35-year-old Nigerian who said he had once been a "Yahoo Boy", as romance scammers are colloquially known.
Mr Bolaji said finding victims was a numbers game.
"You may message thousands [of women]," he told the New York Times. "Only a few will respond. Five will comply. Out of the five, three may not have money. Two will have. Out of two, one may not be able to spend money. But one will surely send."
He confessed to feeling guilty about the practice. "But poverty will not make you feel the pain because you need the money," he said.
Mr Bolaji claims to have stopped romance scamming because he is now in a genuine relationship with a lady in the US state of Georgia. We only have his word for it.

In the few weeks that Alexander was messaging my friend Beth, he did not ask for any cash. That is not surprising, says Mr Nicas.
"You don't even start asking for money until maybe a few weeks or a few months in," he said. "You have to earn their trust first, because if you on the first day say, 'I need money', they're going to know that you're a scammer."
Beth is adamant that she would not have sent any - but scammers are super-persuasive, says Ms Forte.
"They build a rapport and they slowly take you on this journey from being cautious all the way to re-mortgaging your house. I think we're all vulnerable to it in the right situation."
NCDC- Warned Nigerians of Fraudulent Text Messages in Circulation
Face mask scammers rip off unsuspecting online shoppers
Nigeria scams 'cost UK billions'
Comments